Live, online, on the Facebook pages of Teatrelli, Rimini Protokoll and Goethe-Institut București 1.10.2021, 7 PM (Bucharest time) In English, without translation

Walking in public gained new meaning with the pandemic. An ancient and every-day ritual became an integral part of the new normality. People meet, walk, stroll through districts, play in landscapes, and perceive their environment anew with every stride.

In the context of entering the fourth wave of the COVID-19 pandemic, which implies new restrictions and new challanges for the theatre world, on October 1st will take place the launching of the Romanian version of The Walks - an experimental performance created by the famous theatre-lable Rimini Protokoll in Berlin, in co-production with creart / Teatrelli and in partnership with Goethe-Institut Bucharest.

The Walks is a collection of short audio experiences covering specific locations in the city, such as supermarket, theater, park, street etc., being an invitation to rediscover and interact with your environment and grasping walking as a theatrical scenario.

The script and direction of The Walks are signed by Helgard Haug, Stefan Kaegi and Daniel Wetzel, the three directors who founded in 2000 the famous Rimini Protokoll theater-label, awarded, among others,  with the Faust Theatre Prize, the European Award “New Realities in Theatre” or the Silver Lion at the Venice Biennale for performing arts.

On this occasion we invite you on October 1st, at 7 PM (EEST time) to an unique dialogue with Helgard Haug, Stefan Kaegi and Daniel Wetzel - the three directors and founders of Rimini Protokoll, moderated by Octavian Saiu, professor, scholar and professional theatre critic.

The dialogue will concentrate on the experimental production The Walks, but also on the future of theatre, which is – probably more than ever - challanged to find new hybrid and digital formats, to experiment and innovate, in order to survive.

Helgard Haug is an author and director. Both by herself and together with Daniel Wetzel and Stefan Kaegi, she produces under the label Rimini Protokoll. Work by work they have expanded the means of the theatre to create new perspectives on reality. The first collaborative work with Stefan Kaegi and Daniel Wetzel took place in 2000. Since then, they have been developing stage-works, interventions, performative installations and audio plays together with experts who have gained their knowledge and skills beyond the theatre. They first gained greater media coverage with the work “Germany 2”, the copy of a whole session of the German Bundestag with 200 inhabitants of the city of Bonn. For the staging of works like “Wallenstein”, “Karl Marx: Das Kapital, Erster Band” or “Adolf Hitler: Mein Kampf Band 1&2”, Haug and Wetzel brought together experts from different political and social environments. When they were awarded the Mülheimer Dramatikerpreis in 2007, it started a wide debate about new authorship and post-dramatic theatre. Many of their works feature interactivity and a playful use of technology. With “Call Cutta in a Box”, “General assembly”, “DO's & DON'Ts” they lured the audience from the theatre into the city. In April 2019, Haug staged “Chinchilla Arsehole, eyey”, a production which has in focus three protagonists affected by the Tourette syndrome who put the theatre through a stress-test.

She also created multiple audio plays, many of which developed within the context of Rimini Protokoll's theatre works but also often in collaboration with Thilo Guschas and others. Haug’s audio plays have also received numerous awards; most recently, she received the 2019 ARD Radio Play Award for “Chinchilla Arschloch, waswas” together with Thilo Guschas.

Besides her artistic work, Helgard Haug regularly works as a juror and lecturer.

Stefan Kaegi creates documentary theatre plays, audio-interventions, curated formats and works in the urban environment in a diverse variety of collaborative partnerships. Using research, public auditions and conceptual processes, he often gives voice to ‘experts' who are not trained actors but have something to tell. Most of his works are released under the label „Rimini Protokoll“ - the Berlin-based theatre collective he founded together with Helgard Haug and Daniel Wetzel. The trio of directors reproduced the full session of the German Parliament using 200 citizens from Bonn (“Germany 2”). In “Deadline”, they presented a piece with five experts on the central European way of dying, and one in which they reconstructed the bankruptcy of the Belgian national airline Sabena in Brussels (“Sabenation”). Later works include “Call Cutta in a Box”, a one-to-one telephone performance that takes place live from a call centre in India, “Hauptversammlung” (“Annual General Meeting”), a parasitic intervention at Daimler’s shareholders' meeting, the multi-player-on-stage-game “Best Before” (Vancouver 2010), the video-walk “Outdoors” (National Theatre of Wales 2011), various personalized versions of “100% City” (in Vienna, London, Melbourne and many other cities in with 100 local citizens on stage) and “Lagos Business Angels” with Nigerian business people (Berlin 2012), as well as "Weltklimakonferenz" (Hamburg 2014) - a simulation of the UN Conference on climate change. Currently they perform "Homevisit Europe" as an intaractive performance game in hundreds of households across the globe and work on their tetralogy „Staat 1-4“ on phenomena of post-democracy. The CCCBarcelona and the MAAT Lisbon recently showed their installation „Win < > win“ in Lisbon with jellyfish as live-performers.

In 2005 Kaegi won the jury-prize of the festival “Politik im Freien Theater” for Mnemopark. In 2010 Kaegi was awarded the European Prize for Cultural Diversity. In 2011 the jury prize for “Radio Muezzin” in the Theatre Festival Sarajevo, and hei curated the "idiom"-section of "Malta" Festival Póznan. 2015 Remote Moscow was nominated for the Golden Mask in Russia. And in 2018 he won the Grand Prize of Bitef Festival Belgrade for “Nachlass”.

Since 2000 Daniel Wetzel forms an author and director-team with Helgard Haug and Stefan Kaegi, running under the name Rimini Protokoll. Their projects in duo or trio-constellations as well as solo works cover the fields of theatre, audio play, film and installation. Central to their work is the further development of the respective art fields to allow for unconventional views on our reality. For example, Haug / Kaegi / Wetzel declared an annual meeting of the Daimler company a theater piece and made their audience temporary share holders (“Annual Shareholders Meeting“, Berlin 2009) and they staged “100% City“ in more than 38 cities around the world with 100 local inhabitants statistically representating their city. In Berlin and Dresden they developed interactive Stasi-audio plays (“50 kilometers of files”, 2011 or “10 kilometers of files”, 2013). Since the 90s their work with “experts of the everyday life” is described as groundbreaking and leading the path to new forms of documentary theater. Their work “Shooting Bourbaki (2003) was awarded the NRW-Impulse-Prize, “Deadline” (2004), “Wallenstein - a documentary-play” (2006) and “Situation Rooms” (2013) were invited to the Berliner Theatertreffen. The Mülheimer Dramatikerpreis awarded “Karl Marx: Capital, Volume One” (2007) both with the audience award as well as the award for dramaturgy, “Quality Control” (2014) also won the audience award.

Professor Octavian Saiu is a scholar and professional theatre critic. He holds a PhD in Theatre Studies from National University of Theatre and Film (NUTF) in Romania, with a thesis about theatrical space, and another PhD in Comparative Literature from the University of Otago in New Zealand, with a thesis about Samuel Beckett and Eugène Ionesco. He completed his Post-Doc in Modern Literature at the University of Otago and has been awarded his Habilitation in Theatre and Performing Arts. He teaches in the Postgraduate Programme of NUTF, the Doctoral School of Sibiu University and the Centre of Excellence in Visual Studies of the University of Bucharest. He was Visiting Fellow at the University of London, School of Advanced Study, and has taught courses and offered master classes as Visiting Professor at various universities in Europe, Africa, Asia, and the Middle East, as well as the Grotowski Institute.He has been actively involved, as Conference Chair and Invited Speaker, in several major theatre and academic events around the world, including the Theatre Olympics, Wuzhen Theatre Festival, as well as Edinburgh International Festival, where he was Chair of the Samuel Beckett Conference in 2013. Since 2004 he has been Chair of the Conferences of Sibiu International Theatre Festival. He is the Chair of the Shakespeare Studies Conference, organized by Craiova International Shakespeare festival in partnership with the International Association of Theatre Critics (IATC).He is President of the Romanian Section – Theatre Studies of IATC. He has published academic articles in several international journals, as well as twelve books on theatre. He received the Critics’ Award in 2010, the Award of the Union of Theatre Artists (UNITER) in 2013, and the Order of Cultural Merit from the President of Romania in 2020. 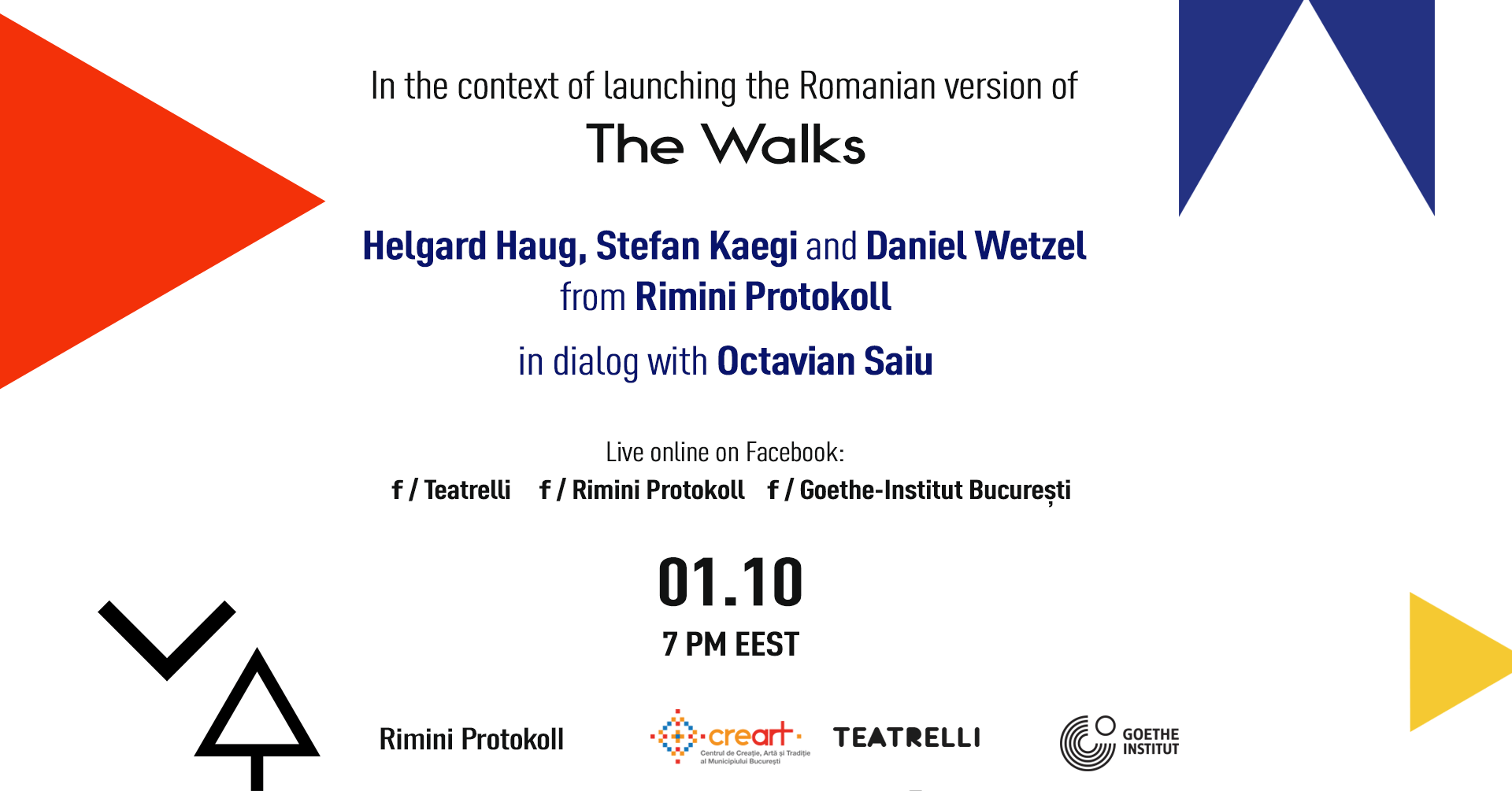